After 17 years in Yankee pinstripes, San Juan born-and-bred Jorge Posada announced to the world that he’s retiring from baseball. Posada made the announcement at Yankee Stadium surrounded by his family. He began by quoting Yankee great Joe DiMaggio, “I want to thank the good Lord for making me a Yankee.”

Posada is arguably the best Yankee catcher since the late Thurman Munson. Now at the age of 41 after being part of five world series championships (1996, 1998, 1999, 2000, and 2009), he joins contemporary Yankee greats like Andy Pettite and Bernie Williams in retirement.

Off the field, Posada has always been known as a positive role model, especially among Latino youth. He wasn’t involved in any scandals or questionable activities that plague many athletes in the limelight. Posada is a family man married with two kids. 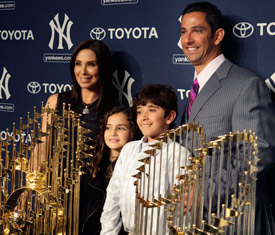 He also runs the Jorge Posada Foundation which was created to raise awareness about Craniosynostosis (a congenital birth defect characterized by the premature closure of the bones in the skull). Posada’s son was born with Craniosynostosis and after numerous corrective surgeries, young Jorge Luis is living a normal, healthy life. According to the Foundation website, they “provide grants to a number of partner medical centers to help underwrite a portion of the costs of initial surgeries and encourage further research of this medical condition.”

Gracias, Jorge for being a man of integrity and an all around class act!
For more information on the Jorge Posada Foundation: http://www.jorgeposadafoundation.org/

For more info checkout these stories in the NYC media: