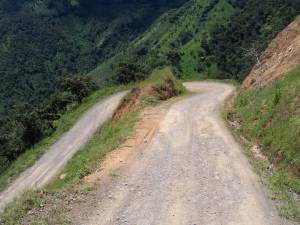 A Rural Road in Mexico

A young preacher from Oklahoma was on a short-term missions trip in Mexico.  The boyish-looking minister had studied Spanish back in Junior High School and really needed to brush-up on his Spanish; so everywhere he went, he carried his Bible and a very faded English-Spanish dictionary.

One day, as he walked through a small town square and nearby market he stopped and felt compelled to ask a man selling fruits, “Escúpeme, tienes tus pescados cubiertos?”  The perplexed and bewildered vendor, thought to himself, “pescados cubiertos” (when translated means covered or hidden fish)?  He politely smiled, nodded and pointed the young pastor towards the seafood vendor across the plaza.

“Gloria Dios!” (Praise the Lord!) exclaimed the excited preacher as he shook the man’s hand and gave him a big bear hug because he thought he had encountered a fellow believer, not realizing that the local vendor thought he was a crazy foreigner and wanted to send him elsewhere.

“Dios te bendiga, Amigo!” (God bless you, Friend!)  said the exuberant pastor as he made his way towards the seafood kiosk.   The young preacher was feeling very positive and he again approached several other people in Plaza, asking them all, “Escúpeme, tienes tus pescados cubiertos?”   However, this time he realized people were giving him strange looks and were intentionally avoiding him.

A Plaza somewhere in Mexico

After about 10 minutes, he then approached a fifth person, an older gentleman who everyone in town seemed to know, as the pastor had seen him chatting with several of the locals.  The preacher asked, “Escúpeme, Señor tienes tus pescados cubiertos?”    The old man, looked him square in the eye, and said “Mande?!” (I beg your pardon.) The preacher repeated the question, “Escúpeme, tienes tus pescados cubiertos?” .  The old man shrugged his shoulders, spat upon him, and walked away.

The young missionary was in total shock.  “Oh, Lord!  I came here to share the Good News with these people and they are not receptive.  I need a sign, God!”  He began walking towards that seafood kiosk across the Plaza.   As he got closer to the kiosk, he noticed the vendor was watching the Texas Rangers play the New York Yankees on a small mounted TV.  It was in English and the man was watching ESPN!

“Hallelujah!” yelled the pastor as he ran towards the seafood stand.  The vendor was startled and slightly annoyed because he was watching the tied game in the bottom of the 9th inning.

“Puedo ayudarle?” (May I help you?) said the seafood vendor, who upon giving the pastor the once over noticed his Bible and dictionary and said in English, “I see you’re not from around here are you?”

The relieved missionary sighed and said, “No Sir, I’m a preacher and I’m here on a short-term missions trip.  Me and some people from my church came to help build a school up in the mountains about 2 hours from here.”

“That’s very good, Amigo!  You’re doing the Lord’s work, that’s beautiful.” Said the seafood vendor. “ I noticed you were talking to some of the people in town and Don Isidro spit on you.  What exactly did you say to him?”

“I see you haven’t been using that English-Spanish dictionary right?” said the merchant.

“That’s right, I felt more comfortable speaking in Spanish today than I did yesterday,” said the pastor.

“And you’re probably wondering why you’re standing here and why someone spit on you, right?”

“Yes!” said the young missionary, believing that this encounter was truly divinely ordained.

Well, Padre (Father/Priest)… I think you meant ‘discúlpeme’… excuse me and ‘tienes tus pecados cubiertos’… are your sins covered or forgiven.”

“Yes! That exactly what I said!”  affirmed the minister.

“I’m sorry Padre, but what you actually said was ‘escúpeme’… spit on me and ‘tienes tus pescados cubiertos?’… are your fish covered or forgiven?  That’s why Don Isidro spit on you and they sent you here because everyone knows that I cover my fish to prevent the flies from getting to them.  Oh and next time, please use the translation dictionary!”